How to Hack your Reality

On the corner of the street where I live in New York, there’s an ornate red pole. It’s an old police and fire call box – once important, now faded and redundant, but still quite splendid. It’s certainly the most interesting sight around that particular intersection. But here’s the thing. I’ve walked past it hundreds of times. And until yesterday, I’d never seen it.

It’s at moments like this that I get a hint of something I know to be true, but sometimes still find hard to accept, which is that I’m missing things all the time. I fail to hear things that are said to me, as well as being blind to much of what happens right in front of me. And so are you, believe it or not. The truth is that we’re all experiencing an incomplete version of reality.

That’s because the conscious part of the brain – the part you’re using to read this article – is so short on capacity that it can only process a limited amount of information at any given time. If you fixated on the details of everything around you right now (every sensation in your body, every fiber of your clothes, every sound in the room, every contour of each object) your brain would hang like an overloaded computer, and you wouldn’t be able to get anything done. So to cope with the complexity of the world, your brain has a neat solution: it makes sure that you notice whatever seems most relevant, and it filters out the rest without you realizing. It’s a phenomenon known to scientists as “selective attention.” 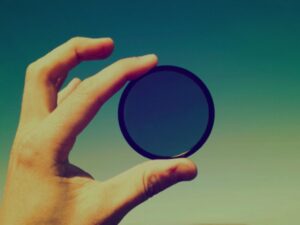 What gets through your filters?

Importantly, there’s a pattern to the things that get your attention. What your brain treats as relevant enough for you to notice is whatever matches what’s already top-of-mind for you: your priorities, mood and expectations. That’s why a Harvard study found that most radiologists failed to see a gorilla printed on a lung scan, even though eye tracking devices showed they looked directly at it.[i] The radiologists were looking for nodules, not gorillas – so their brains filtered out the “irrelevant” monkey completely. In another study, researchers contrived to put volunteers into a slightly good or bad mood by giving them random positive or negative feedback about their performance on a minor test. After that, the volunteers were given some neutral descriptions of fictional people to read. Their happier volunteers were significantly more likely to see the people described in a positive light, compared with those they’d deliberately put into a funk.[ii] Meanwhile, researchers found that people looking at a black and white picture of a banana perceived it as slightly yellow. Their brain expected it to be yellow, so that’s what they saw.[iii]

As the variety in those studies suggests, there are various types of selective attention – either we’re blind to things we’re not looking for (inattentional blindness) or we seek out evidence that confirms our expectations while ignoring all else (confirmation bias). And their implications are pretty huge. It’s not just that we might occasionally fail to appreciate cool neighborhood architecture. Our entire perception of reality can be strongly influenced by our starting point, good or bad, because our brain automatically makes sure that we see and hear anything that resonates with our aims, attitudes and assumptions (for those who like alliteration). Meanwhile, it downplays everything else.

So no wonder we sometimes have “one of those days” when everything and everyone seems annoying. Start the day in a bad mood – perhaps because of a tough commute or a spilled coffee – and there’s a good chance you’ll go on to notice every potential source of aggravation while ignoring a lot of what’s good about the day. People might well have been perfectly friendly to you, but your brain will tend to filter out signs of cheeriness in favor of making sure that you clock every single scowl and frown.

Being more intentional about the day

This presents us with a big opportunity. Because if we’re more deliberate in setting our priorities going into the day, or as we walk into an important conversation, we get to tweak the settings on our brain’s perceptual filters. Put bluntly: decide a meeting’s going to be a drag, and you’ll tend to see everything that confirms you were right to be pessimistic. Decide to find something interesting or encouraging about the interaction, and you’re less likely to miss the one gem that presents itself halfway through. This isn’t airy-fairy “positive thinking.” You can’t necessarily make a terrible day an awesome one. But if you take a moment to set some clear intentions (as I call them), you change your brain’s attentional filters – and the facts can appear to change with them.

Here’s a quick intention-setting routine I like. It takes just a few seconds as you head into a task or interaction.

And yes, you can even apply this to your commute. Decide to notice things that make you smile on your way to or from work – and you’ll miraculously find your reality a more delightful place to be.

A version of this article first appeared on FastCompany.com